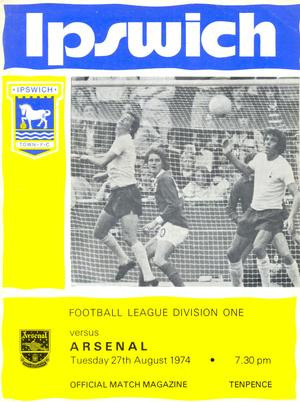 Arsenal vs. Ipswich is a game Arsenal should really be winning however it is precisely these types of games that Arsenal tend to struggle in. A tricky away tie to a physical Championship team probably wouldn’t be Wenger’s preferred game but with silverware in sight it is a game he must take seriously.

Arsenal’s league form sees them in being unbeaten in four games since the 1-0 loss against Man Utd, including an impressive win against Chelsea, although some people might argue that Chelsea were as bad as Arsenal were good. It is also worth noting that Ipswich dumped West Brom out of the cup in the last round, a West Brom team that beat Arsenal at the Emirates. Arsenal have beaten Ipswich eight times in their last nine meetings in the league. However, Ipswich won the last cup encounter between the two clubs back in November 2000

A worry for Arsene will be the fitness of his centre backs with Vermaelen’s on-going injury problems still posing an issue and the recent hamstring injury of Squillaci during the 1-1 draw with Leeds in the FA Cup, another game that arsenal should have really won on paper. Having said that though, Wenger is lucky that the only 2 fit centre backs he has are the ones that have yielded him the best defensive results this season, the emergence of Djourou this season is reminiscent of song’s development a couple of seasons ago which has established him as a 1st team regular, whilst Koscielny seems to be improving game to game since the victory against Chelsea.  Wenger is one centre back injury away from doubling his January shopping list after already admitting he will be looking to bring in a new face after the loss of Squillaci.

The Ipswich game should also be a great opportunity for Arshavin and Chamakh to find their goal scoring feet again in light of their recent dips in form should Wenger go for a more experienced line up. Walcott’s post-match comments against Leeds, albeit very honourable, may work against him rather than for him. We saw how Eduardo’s dive against Celtic last year affected his penalty claims and every gunner will have their fingers crossed that Walcott’s honesty won’t come back to haunt him. Wenger may also call upon Bendtner whose height and physical presence may edge him in front of Robin van Persie, especially with Wenger’s habit to rotate in the cup.

Ipswich have also just hired Paul Jewell as their new manager after the sacking of Roy Keane, Jewell himself has admitted that there’ll be no quick fix for Ipswich but as we’ve seen so many times in football and new manager can really add a supernatural boost to the team which Wenger should be wary of. All in all, this tie will be very important for arsenal, a taste of silverware could just be what their young players need to kick on and breed further glories

Martin Atkinson will be officiating the game, who has awarded the most penalties in the league this season as well as dishing out the most red cards. But with Walcott’s post-match interview honesty being highlighted by the media could this mean that Atkinson will specifically watch out for Walcott’s ability to stay on his feet or does it mean that Walcott will continue to hit the deck regularly?