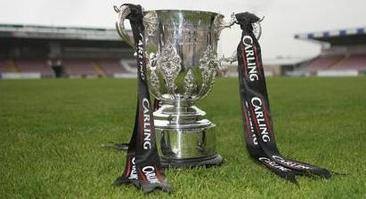 As we approach what many call the ‘Business End’ of the season the League Cup offers the opportunity to its participants for the first piece of silverware of the season.

For Arsenal, as many continue to remind Arsene Wenger, it poses the chance to win silverware for the first time in six years. Many of the young Arsenal stars are coming if age and a well rounded and more experienced squad this sees them as the only team left in England with the chance to win a unprecedented quadruple.

Wenger also believes that winning the Carling Cup could prove as a springboard in giving his side the experience of knowing how to win a trophy. It has been clear from the beginning that the Arsenal manager has decided to take this competition more seriously this season. Starting most games with a good mix of first and youth team players, whereas in the past this competition was set aide solely for youth development.

Birmingham on the other hand, cannot boast such luxuries and have largely played their first team in all competitions. Obviously The Carling Cup represents their only chance of winning a trophy this season and combined with the possibility of relegation, they will be throwing everything at The Gunners tomorrow.

The two sides have only previously met once in this competition. Back in 1997 when Arsenal won 4-1.  They have played both fixtures in this seasons Premier League, Arsenal winning both, 0-3 at St Andrews and 2-1 at The Emirates.

Arsenal last reached the final back in 2007, and after going 1-0 up through a Theo Walcott goal, a largely youth based team ended up being rattled by Chelsea and lost 2-1. Arsenal have previously reached five other League Cup finals, loosing three and winning two. The last time they won this competition was in 1993 when they beat Sheffield Wednesday 2-1.

Birmingham have reached the League Cup final on two occasions. Most recently in 2001 when they lost 5-4 on penalties to Liverpool. Before that you have to go back to 1963 when they beat Aston Villa 3-1 on aggregate.

A distraught Cesc Fabregas has been ruled out of the final after picking up a hamstring injury during Arsenals mid week 1-0 win over Stoke. The Arsenal captain came off after less than fifteen minutes of the first half. He tweeted after the game “I don’t know if I’ll make Sunday or not, but all I know is that from this moment to Sunday 16:30 I won’t sleep if it’s necessary. I’ve waited too long to captain a final for Arsenal and I wont give up till the last second.” As a result Robin Van Persie, who comes back from an injury, will captain the side.

Theo Walcott is also out for the Arsenal. He twisted an ankle in the Stoke game. Abou Diaby is back after injury and suspension has kept him on the sidelines. Wenger has the rest of his squad to choose from. Birmingham Manager Alex McLeish has the luxury of staring his first choice eleven players.

Arsene Wenger has yet to sway from his 4-2-3-1 formations and will keep it tomorrow. In principle it sees two players sat in front of the back four, allowing a secure base for the front four to attack. However in practice only one of those two sits to let a front five move all over the park covering for each other. This freedom of movement allows for the intricate passing style but also makes it very hard for the opposition defence to pick up their markers.

Birmingham are expected to start with a standard 4-4-2 formation. A brave move against Arsenal as the two central midfield players may find themselves exposed against three and will have a lot of tracking to do when out of possession. They may also find themselves chasing the ball against three central midfielders who will pop the ball off each other for fun, causing them to tire in the later stages of the game.

However playing two in the middle also allows them to play two up top and Zigic and Martins will be a handful for an Arsenal defence who sometimes struggle against big and direct opposition. They should take heart from keeping Stoke out on Wednesday but a 6ft7 Zigic will be a different prospect.

Expect and contradiction in styles. Birmingham will play long direct balls and will be slow on any set pieces to disrupt the Arsenal style. Expect nothing different from Arsenal who will pass the ball to death and will be buoyed by the relaying of the Wembley pitch in the same manner as the Emirates. This could be the ultra contradiction in football philosophies.

The outstanding Jack Wilshere has had an exceptional 2011 so far. Cementing his place in the Arsenal first team has seen him gain his first start for England. He put in a respectable 45 minutes for England against Denmark and followed that up with an unbelievable performance against Barcelona. It was staggering to see a 19-year-old play combative passing and skill full football in front of arguably the world’s two best midfielders, Xavi and Iniesta.

In the absence of Cesc Fabregas, it will be down to Jack to keep the ball moving and find those incisive passes. He has also been the man who takes the ball from the defence to begin every Arsenal attack. Against Stoke on Wednesday night he astonishingly completed over 100 passes.

Barry Ferguson has a similar role in the City midfield. Fulham’s Danny Murphy is the only player in the Premier League to have completed more passes than him this season. Whoever gets the most of the ball between these two will be able to stamp their control on the game. Allowing their side to move forward in possession the most may just be the way to the trophy.

Mike Dean will take charge of tomorrows’ game. He has only officiated for Birmingham once this season, where is issued no cards. However in the three Arsenal games he has refereed this season he has issued ten yellow cards and one red.