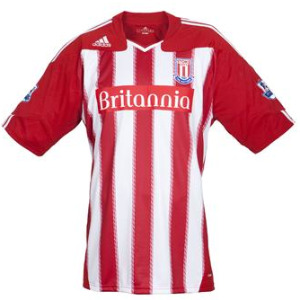 In a Premier League season consistent only in its unpredictability, where once commentators would say that the title was still “mathematically possible”, now we should say that, for Arsenal, the title remains an actual, if slight, possibility. This Sunday’s game at Stoke is perfectly scheduled for the Gunners, ending just before Man Utd and Chelsea kick off. A win at the Britannia would put Arsenal level on point with Chelsea, and only three behind Man Utd.

With every game feeling like a cup final at this stage of the season, most of all this is an opportunity to develop the winning mentality that has been absent in the closing stages of this campaign. Stoke City, though with a real cup final of their own to play next weekend, will nonetheless doubtless provide the sort of doughty opposition that has troubled Arsenal in recent years. The game also sees a rerun of last year’s heated fixture, memorable for Aaron Ramsey’s broken leg, and a great Arsenal comeback that led to a 3-1 win.

Arsenal have won their last 4 matches against Stoke. Last year’s 3-1 win at the Britannia was their first in 5 attempts in the Potteries.

Arsenal have the best away record in the league, with 30 points collected on their travels, and need just three more goals away from home to beat their record of 38 away goals in a season (2002-3).

Arsenal’s team that beat Man Utd last week was the youngest to play in the Premier League this season, with an average age of 23 years and 284 days.

Stoke are looking to secure their first top-ten finish in 36 years.

Thomas Vermaelen, out since August, will have a fitness test before the game and has a chance of making his comeback in place of Johan Djourou, who injured his ankle in the last game.

Matty Etherington is still out for Stoke, who will keep Asmir Begovic in goal.

Like at the Emirates in February, Stoke will be happy to defend deep and allow Arsenal to dominate possession. Though ostensibly lining up in a 4-4-2, they will ask Jon Walters to help out defensively in midfield, leaving Kenwyne Jones as the sole out-ball up the pitch. Going forward, they will rely on Jermaine Pennant to whip in crosses from the right hand side, and of course on free-kicks, corners, and Rory Delap’s long throws.

Arsenal, for their part, look to play their usual short passing game in the midfield, and should aim to counteract Stoke’s defensive outlook with fast-paced, direct passing in attack and high pressing when not in possession. In the potential absence of Fabregas, Arsenal will have to play the ball wide to Walcott and Nasri more often, asking Robin van Persie to get on the end of crosses. Aaron Ramsey and Jack Wilshere will take it in turns to raid forward, with Alex Song left to concentrate his attention on the midfield battle with Glenn Whelan and Dean Whitehead.

Aaron Ramsey – back at the scene of his horrific injury last season, Ramsey will have to contend with his painful memories, as well as a potentially hostile reception from Stoke fans and players. A mature young man and excellent player, whose service Arsenal have sorely missed this season, his greater eye for goal means that, of all the midfield players, his performance could be the most decisive.

Wojciech Szczesny – one of the great success stories of Arsenal’s season, the goalkeeper will be crucial in dealing with the expected aerial bombardment, and in organizing the defence to deal with the peculiar threat of Delap’s long throws. Brave and confident, Szczesny must transmit his decisiveness to the less certain defenders in front of him.

Kenwyne Jones – against Arsenal, the tried and tested formula is to launch the ball up to your big target man. It is to be expected that Stoke will be no different, and Jones, who possesses all of the physical attributes of a world class striker, if not the consistency and mental strength, will be aiming to give Arsenal’s defence a torrid afternoon.

Halsey will have an important role to play, given Stoke’s reliance on set pieces, and the potentially heated atmosphere at the scene of Ramsey’s injury last season.  A referee who is universally admired (even by Jose Mourinho!) for returning to the game after his treatment for cancer, Halsey will have to block out the appeals from the always-loud Stoke support. Expect the tackles to fly, and for the referee, who has by far the lowest cards-per-game ratio in the league this season (of those who have refereed at least 10 games), to have to go to his pocket if things boil over.