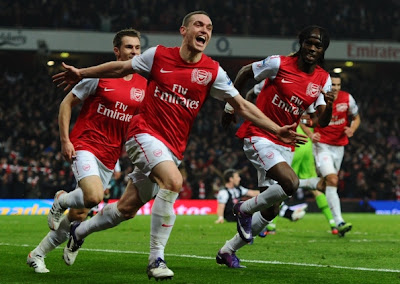 What a day for the Arsenal. Everton have been such a tough nut to crack at Goodison, beating the likes of Chelsea, Manchester City, and Tottenham recently. It was vital for the gunners to get an early goal and that's exactly what we did.

We were overflowing with confidence and clearly well rested from our 9 days off. Everton just couldn't keep up with our pace for the first 15 minutes, and we really should have finished them off then.

Ramsey could have a had a hat-trick and van Persie also squandered a fabulous opportunity. But we did take the lead in the seventh minute, thanks to last week's hero, Thomas "The Verminator" Vermaelen.

That goal made the game a lot easier for us. Everton could no longer use their most effective strategy at home this season. They couldn't organize, sit deep, and frustrate their visitors because they were forced to come at us. Vermaelen's attacking threat made a huge difference today.

We haven't seen those words too often while talking about Arsenal in a match report. But what was even more important than Vermaelen's attacking threat was his brilliant defensive display. He was immaculate along with his partner Laurent Koscielny, who is quickly turning into one of the best centre-backs in the Premier League and yet another great find by Arsene Wenger.

Another rarity in the Arsenal defense this season has been fit full-backs, and we had TWO today, both playing amazingly. Kieran Gibbs was yet another defender who produced a great attacking threat for the Arsenal. And his contribution in Everton's half forced Roynston Drenthe backwards, which only helped the gunners defensively.

But one of the best Arsenal players on the pitch today was Bacary Sagna, which leads me to the next topic.

Sagna also delivered a brilliant ball to Robin van Persie's head to start our comeback at Anfield and both of our goals against Newcastle came from that side as well. This is all thanks to a recent tactical change by Arsene Wenger. When teams press us in our side of the field, Theo Walcott moves centrally, Sagna pushes up, and Koscielny pushes to the right.

Sagna won countless headers from goal-kicks against Steven Piennar this afternoon, as he did last week against Davide Santon and James Perch. His movement on the right-hand side has allowed Walcott so much freedom. And as he takes defenders with him, more space opens up for our beloved captain.

You must feel the Arsenal of old would have lost a game like today's. We would not have been able to put up with the kind of pressure that Everton put on us in the second half. But the worst part of the old Arsenal was their inability to handle change. And change was what David Moyes did early on, pushing Marouane Fellaini up to almost partner Jelavic, while moving Cahill into the midfield.

But such is the sturdiness of Arsenal's defense that we did not even need to response with a change of our own. Thomas Vermaelen and Laurent Koscielny kept Fellaini and Jelavic extremely quiet and it was mostly down to their defensive communication. How many times did Everton's forwards get caught offside? And every single time, it was so tight, so impossible to call. That's how good Arsenal's backline has gotten. They barely gave Everton a sniff today and were cool, calm, and collected, withstanding every bit of Evertonian pressure.

As dominant as Arsenal have been going forward this season, the biggest difference for this year's run-in could be their defensive performance.  This new Arsenal side contains a confident goalkeeper and a solid pair of centre-backs. If Arsenal can continue being this firm in the back, next year should be very exciting. It's just too bad it's too late for this season... or is it?

#4 Desh 2012-03-28 12:09
I think Thomas Rosicky's resurgence is also worthy of note. The mid-fielder has been very instrumental in Arsenal's last few games
#3 KK 2012-03-22 14:00
Indi: I know it seems like i'm just moaning, but I'm just unsure of Wenger's logic in mixing up the team selection for this match when everyone was fit and rested. I am fully behind the team. They have shown in the past few weeks that next season could break the drought, but Ramsey did not deserve the nod. My worry with the tactic here is the loss of width on the left side. playing arteta, ramsey, rosicky, and song means there is no real threat down the left other than Gibbs. This allows the opposition to shift over to cover the brilliant walcott/sagna attack pointed out above. It also crowds the middle where Rosicky has found success cutting through the defense. Ramsey and Rosicky are very similar players and I think playing them both may have been a mistake on Wenger's part. Whether it is my theory here, or Everton's parking the bus, our wing play was subdued until late in the match (once gervinho came on)
#2 IndiGunner 2012-03-22 13:39
Well Done AFC, and come KK get behind the team, last year we moaned about Koscielny and thiugh JD was a top draw, not JD is crap and Kons is the best in the league! This is Ramseys first full season and this lad can only get better!
COYG!
#1 KK 2012-03-22 13:29
I completely agree about the right side tactics and Koscielny's rise. One thing you failed to mention was Everton's disallowed goal. Sure, it was only one defensive mistake, but it was a somewhat glaring one. I hate to be so negative, but i don't understand Wenger's tactic with giving Ramsey the nod. Rosicky, while he still performed well in the floating role, has been much better in the middle. I feel like not having gervinho/ox out left, we lost a lot of width because it's natural for Rosicky to want to come inside. Ramsey's work rate is great and he's clearly passionate about the team, but I don't think he is quite there yet. Especially not for unearned starts over some other players who have been in great form and were well rested after 9 days. Wenger seems to be being stubborn in his continued faith in the guy. And it's not about the missed sitter. He loses possession far too much for Arsenal's style and falls down a slippery slope once he starts making mistakes.
Refresh comments list