The Independent has reported that Wenger is in Brazil not only to act as a pundit for French television but also to scout potential transfer targets.

The pressure is now firmly on Arsenal and our French boss to perform in the summer transfer window following the club’s rejection of Cesc Fabregas and his subsequent move to Chelsea.

It is universally obvious amongst fans (and I hope management) that the club needs a new marquee, world-class, striker to come in.

Giroud is a fine player, and will make a perfect understudy, but if Arsenal wants to win the league against the likes of our free-spending Stamford Bridge neighbours (who have already brought well), then, at the very least, a top striker is required.

Fabregas rejection: Difficult decision, but the only decision

15th August 2011 the day Fabregas left Arsenal football club, enticed by his boyhood heroes Barcelona. Who could blame a young man wanting to play for his local team which was also the best team in the world and one of best teams in the history of the game?

Cesc made a personal decision that he believed was best for himself at a time when Arsenal needed him the most. This does not make him a Villain or a traitor, Fabregas did many wonderful things for Arsenal which should not be minimised or tainted, and he will still have a place in many Arsenal fans hearts. The memories of games against A.C Milan and Tottenham Hotspur will never fade with time. 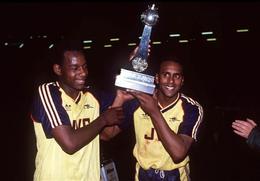 25 years have now gone by, a quarter of a century since the most famous and certainly the most dramatic moment in the history of Arsenal Football Club.

May 26, 1989 saw the Gunners go to fortress Anfield needing to win 2-0 to win the league on goals scored from Liverpool.

It looked impossible, in those days opposition goals at Anfield were about as common as snow in July in Florida, it almost never happened.

But that night, a seven year old boy fell in love forever, my life-long passion for Arsenal Football Club was born….

If Arsenal buy Fabregas does that 'kill' Ramsey?

Do Arsenal need Cesc Fabregas? Such a question would not even need a second thought a year ago to those associated with the Arsenal. But with the midfielder’s future uncertain at Barcelona there seems a chance he may ply his trade with another Premier League side come the start of next season.

The Spaniard will consider a transfer to the Premier League this summer as his return to Barcelona has not gone as planned, as unexpected fan displeasure has seen an exit on the cards since last summer. Arsenal, Manchester United, Manchester City and Chelsea will be offered the chance to bring Fabregas back to the Premier League but the idea of a return to Arsenal is not the foregone conclusion that it once may have been.

Eight months have passed since I wrote an article for this website entitled The Professor in the Boardroom with the Chequebook, in which I asked whether Arsene Wenger was leading Arsenal through a period of stagnation or evolution. As an incredible campaign reaches its conclusion – a season where the club led the Premier League for longer than City, Liverpool and Chelsea, only to fall away in the spring – it appears the answer to the question depends exclusively on the outcome of Saturdays FA Cup final against Hull.

The English game’s showpiece occasion now represents Arsenals most important match since the 2006 Champions League final against Barcelona and the result will certainly influence the direction, not to mention the mood of the club for the next four or five years.

Make no mistake, May 17th will be a landmark day in Arsenal Football Club history, for better or worse. But you know that already.